Read my article on Kendrick Lamar’s best beats over the years. // All images are my own.

I met a living legend.

I had been counting down to Tuesday, June 5th for more than three months. Held a few days after the end of my school year, it would be a reward for finishing my junior year. But it was much more than that, too. I would see in person the artist who has toured internationally and won dozens of accolades and the man who fuelled my curiosity about rap and emotional maturity. I was beyond excited.

My mom and I drove up from Pennsylvania in a rush, but the traffic was not helping us. It was a 7:30pm start in Xfinity Center in Mansfield, MA, but I had to roll in around 7:50. I was totally alone. Believe it or not, it was my first (non-classical music) concert ever, and I asked lots of my friends beforehand how I should dress, act, etc.

I settled down on the right side of the stadium– I had a good (aka expensive) seat, but of course it was well worth the money. One reason I absolutely wanted to get tickets to this particular tour– the Championship Tour– was because it was a total Top Dawg Entertainment Powerhouse. Every one of the nine artists signed to the label except for Isaiah Rashad was hailing around the country. I could not miss a chance like this.

Unfortunately, when I read on social media that SZA had to step out to protect her vocal cords, I was devastated. However, contrary to my worries, the concert was not in the least any less enjoyable because of her absence.

When I walked in, SiR was performing his set. I was amused by the trading card background and sports equipment for every artist. Ab-Soul appeared with a bow and arrow, and Jay Rock in a basketball? jersey. (I am not a sports person. I don’t even know what sport that was.)

I was disappointed that these artists used pre-recorded vocals to songs that featured Kendrick or any other artist present, like Ab-Soul with “Bloody Waters” from the Black Panther soundtrack, or notably Jay Rock with “King’s Dead” or ScHoolboy Q with “Collard Greens.” However, I understood that they wanted to give each performer the spotlight during their own set. Also, it would lessen the impact of their grand appearance if they came onstage as a feature to someone else.

ScHoolboy Q took a long time to get on stage, but he gave us a good laugh by rolling up in a golf cart. His trading card stated that his “pregame ritual” is “yo sister.” He opened with “THat Part,” if I remember correctly, which is a favorite of mine. He then complained about the guy to girl ratio in the stadium, saying “I’m not trying to talk to y’all [guys],” again to laughs in the crowd. ScHoolboy Q had a noticeably longer set than previous artists; he was the second-to-last, just before Kendrick.

I really liked ScHoolboy Q’s stage presence and playfulness. I feel that his humor comes with more finesse and is more tongue-in-cheek than Kendrick, who is more severe when throwing shade. I will definitely listen to Oxymoron and Blank Face LP to further support ScHoolboy Q.

While the crowd waited for Kendrick Lamar in about a 5-minute transition period, the person next to me pointed out that SiR was just chilling in the aisle right next to our section and talking to fans! I could hardly believe my eyes. Anyone who knows me knows I’m totally shameless about approaching celebrities and asking for pictures. I did the same and I told him I’m so grateful for making my first concert ever so enjoyable. He then gave me a hug. It was so heartwarming. SiR just gives me a vibe that he’s a totally sweet person who just loves what he does, and watching him perform tonight made me want to support his music and listen to it more often.

Now came the moment I had been waiting for. I felt sick in my stomach from anticipation. I knew that the DAMN. Tour setlist opened with “DNA.” which in general he performed first in all sorts of high-profile performances. I expected the same here. Suddenly in the dark, I heard the infamous opener “Kendrick Lamar states views on police brutality…” and I braced myself. With bursts of red light, Kendrick hollered from somewhere “I got, I got, I got, I got.”

People started screaming, but I had no idea where he was. I looked around frantically and finally noticed he was atop a video screen, lofty above all other artists who had taken the stage. I honestly felt bad for other artists also in Top Dawg who know they aren’t as high-profile as Kenny, but I trusted that they are hopeful about their future.

Kendrick Lamar donned a comfortable and friendly t-shirt, long-sleeved shirt, and red pants, making for a lot more informal environment than the more presentational costumes like a kung-fu uniform at the Grammys.

Kendrick used the large video screens extensively to couple images with his songs. His second, “ELEMENT.” literally featured images of mountains, waterfalls, the sun, moon, and fire to embody the all-encompassing nature of not only the four elements but his artistry and persona.

One of the reasons why Kendrick Lamar is my favorite rapper is because he is so intentional about every part of his artistry. Every artistic choice he makes is part of a larger picture and message he wants to convey.

He made sure to include songs not on his four full-length albums, such as “Big Shot” or his feature verses on “New Freezer” and “Goosebumps.” The variety again reminded the audience that Kendrick is not all conscious rap but also supports artists with other focuses in their works.

When “King Kunta” blasted in the middle of his uber-recent songs, I literally felt my blood pumping with the bass of the beat. I was so excited to hear him pull out older songs. Then, a little later, he asked who among us were “Day 1” fans. I hesitated to cheer because I worried he might pull out something from Section.80 or even Overly Dedicated, the mixtape before Section.80.

To my relief, he played “Swimming Pools,” and I felt a wave of nostalgia wash over me. “Swimming Pools” was the first song that introduced me to Kendrick, and I will forever be thankful to my friend and that song for ushering me into his world. “Backseat Freestyle” was an unexpected but incredibly satisfying crowdpleaser, followed by more DAMN. songs. Then Jay Rock joined him for some features.

To calm down after the visceral “m.A.A.d city,” Kendrick told us in the dark that he wants to live in the moment. Then, he asked us to pull up the flashlights on our phones. Someone said, “He’s gonna do ‘All the Stars.'” That made perfect sense. But he played instead “LOVE.” That was a surprising but understandable choice. As we swayed to the gorgeous beat and live vocals from Zacari, I enjoyed a moment of great calmness of my mind and spirit. We stood in solidarity of our love for Kendrick’s music. 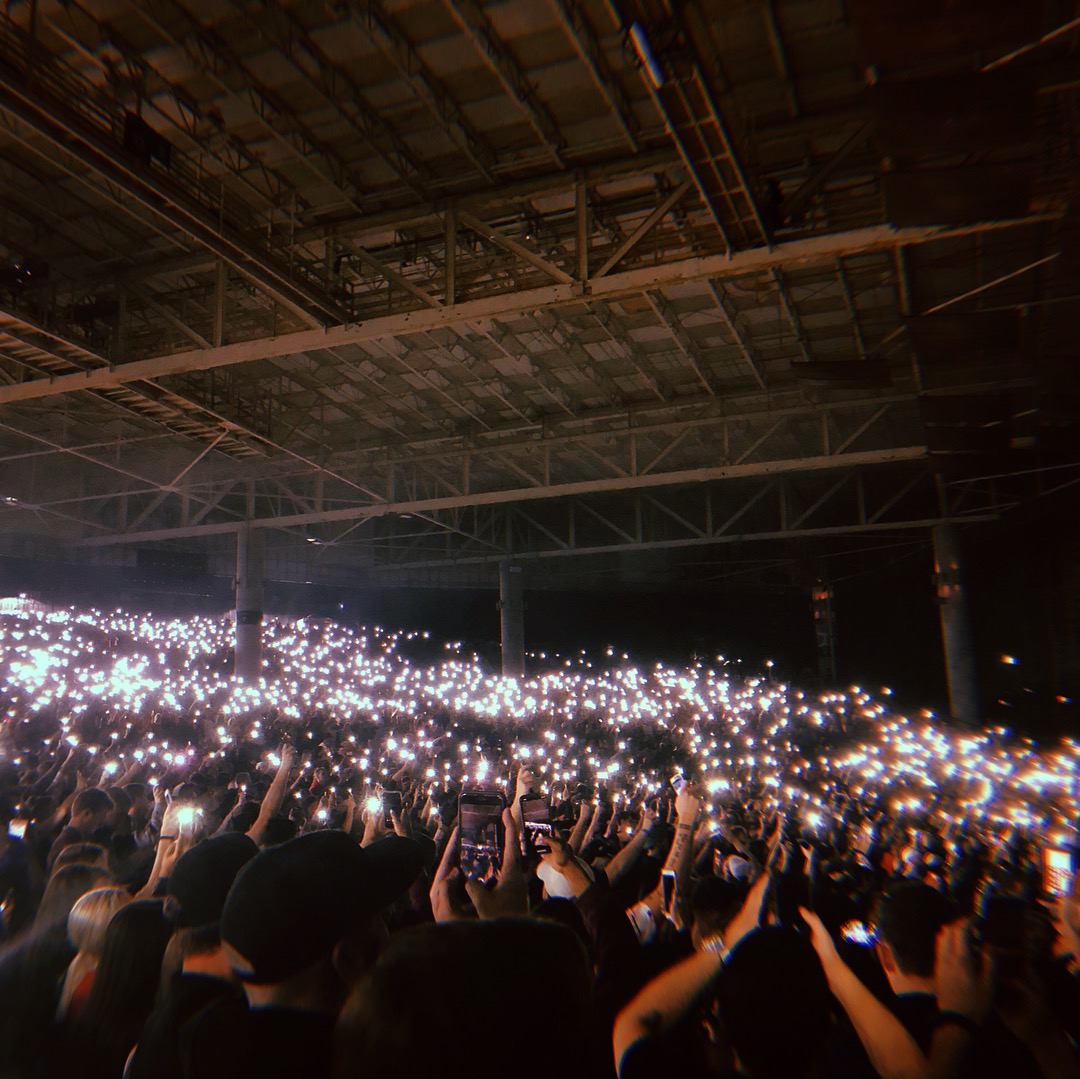 Afterward, he rapped an old favorite of mine (and actually the first song I ever learned to rap), “Bitch, don’t kill my vibe.” I unfortunately had to leave after that song because it was getting too late, but I believe he did “Alright” as perhaps the last song. It was an appropriate and poignant choice for the final act, a message for an America he wants to see.

The Championship Tour helped me destress about everything else going on in my life. It was a thrilling and heartwarming opportunity to hear both classics and recent hits alike live from the legendary and respectable Kendrick Lamar himself, along with many other Top Dawg artists. It was truly inspiring to witness the cooperative spirit among the label members and how they support each other’s careers and collaborate with each other. All in all, the Championship Tour was an unforgettable night.

Washington Post’s article on the Tour